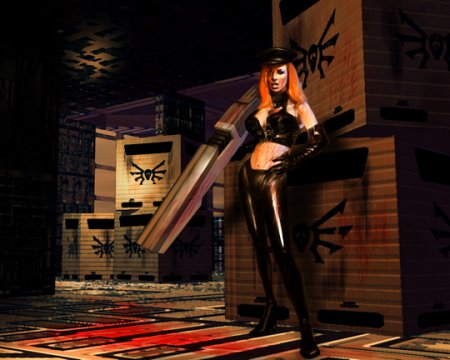 The idea for the "Krak Whore" piece came to me after seeing Paul Steed's little GIF animation of the Crack Whore character wielding her big gun. I wanted to do my own rendition of her just because I thought it would be fun, and I had some free time on my hands. Besides, a girl and a big gun... who could resist?

I started by drawing a sketch directly into Photoshop in order to block out her general pose. Next, I took a closer look at her costume and painted that in using reference photos of shiny materials to make her costume look like it was made of black latex or patent leather. I used separate layers for different parts of her body so that I could isolate certain areas if I needed to apply filters or adjust the color balance. The gun was created in 3D using Strata Studio Pro and adjusted to match the perspective and pose of the figure I had just painted. After taking a snapshot of the gun and importing it into Photoshop, I was able to keep it on a separate layer so that I could move it around and adjust it the way I wanted it. When I was satisfied with the position of everything and her overall look, I flattened all of the layers into one layer in order to make the file size smaller.

I wanted the background to have a slight sense of depth, so I decided to have a scene where crates were in the back, middle, and foreground. I used Bryce 3D to model and render the background scene, because it's fast, easy, and powerful enough to give me the atmospheric effects I wanted. I just used cubes and simple rectangular polygons to cut down on render time and because I'm not much of a modeler. As for the texture maps, I just used the generic ones that came with the program. The scene was then rendered as a PICT and brought into Photoshop where I then added the skull logos, rust stains, and adjusted the color. I ended up cropping some of the background in the final.

Once the background was done, I added the Krak Whore layer above it. I had to position her so that she would fit in with the background perspective. Next I adjusted the colors so that both layers would match. I like Quake 2's orange colored atmosphere, so I made my image a little more on the orange side. Finally, I gave her a shadow and added some blood stains. That's it! Done!

I worked on this image for about 8 hours total. (over a period of 2 weeks)