"The Alchemist" by Kyri Koniotou 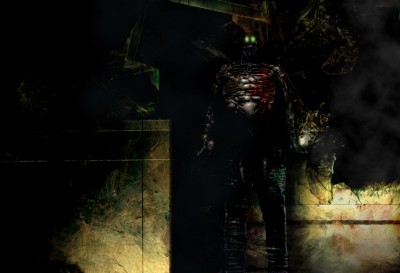 This image was created using photoshop, I started off by scanning in an old pen sketch and began experimenting with it by adjusting the brightness and contrast at high levels. 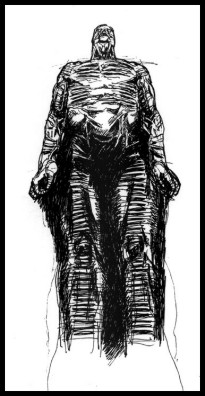 It was left at that as I worked on another image with a background and some figures which I lit using the lighting filters and a filter called Nightmare 2 which gave it a nice atmospheric look. As It progressed I started to concentrate more on the background and so decided to remove the figures from it. I thought it would be better to extend the background so I doubled the canvas length, duplicated the original and horizontally flipped and pasted it next to the original.

I decided that the pen sketch character might look good brought into this background. The figure then needed to be worked on which I did firstly by duplicating layers, experimenting on each one with the levels, colour balance, brightness and contrast and blending them togetherwith the layer options to give it added volume. He was then lit with the lighting effects and I used the burn option to darken certain areas off. A customised brush at different sizes was then used to paint him. 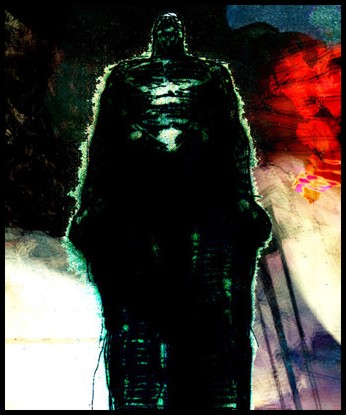 I thought it might give it a more supernatural look if the character had eyes that glowed. So I created a new layer, filled it with black and set it to screen so I could position lens flares over the eyes. I also wanted to add a mist effect which I did by using the filter difference clouds, repeating and adjusting the opacity on another layer. I added some additional details to the backround by taking sections of it, cutting, flipping, pasting and neatening them with the cloning tool, then painted in details such as cracks and darkened areas to give it a more solid look. Finally I went back to the figure to neaten it and shade it with the lighting tools as a finishing touch. I've only recently gotten into using photoshop and this image is amongst my first.

This image took me on and off about 25 hours to complete.