"Beware The Moon" by Costas Koniotis 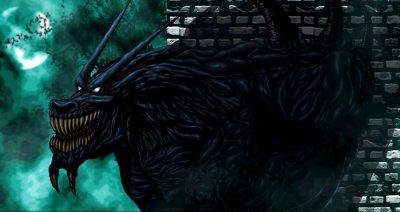 This image was based on the werewolf in Nightmare creatures but has probably also been influenced by games like Resident Evil and Quake, also movies like The Howling, American Werewolf In London and artists like Simon Bisley, Dale Keown and maybe some Tim Vigil in there too. I am 21, currently on a graphic design course and have only recently started using PhotoShop. Later I would like to get into using 3D packages like Lightwave and 3D Studio to create characters for games. 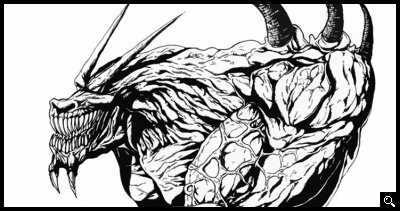 Firstly I drew and inked the character, scanned it into PhotoShop and used the cut-out filter to neaten the ruff edges. I created a new layer beneath it, set the above layer to a transparent setting and put basic colours on the character with the layer below.

For the background I used the difference clouds filter, painted in a moon using the eliptical marquee, scanned in a pic of a brickwall which I altered with the brightness and contrast and colour balance and put it on a layer between the character and the background, then used the cut-out filter on both to make them fit in better. To cast the shadow on the wall I duplicated the character and on the layer below used a threshhold, gaussian blur and transform perspective to cast it on the wall. I then lit the character with the lighting effects and worked into it with the burn, dodge and smudge tools for a more solid look.

After I shaded the character I put a craquelure filter on the brickwall to also give that more of a 3d look and adjusted the levels and colour balance to get it fitting in better. I then gaussian blurred the background clouds and moon to smoothen them, put a low opacity screen layer of mist over the wall and sections off the character which were basically duplications of the background difference clouds. I then thought it needed something more to add to the mood so I decided to scan in a pic of a tree, sillouetted it with the levels, carefully cut it out, gaussian blurred it and put it behind the wall between two layers of mist which I thought added to the atmosphere.