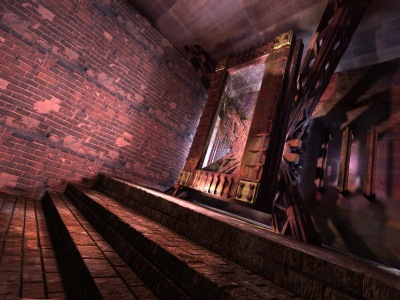 Most of my work is done in PhotoShop, and strictly 2-d.

Usually on an image as complex as this I work out a drawing on paper before- hand. This can take a lot of time and is pretty tedious. If you try any shortcuts, you will make errors that are not obvious, but will hurt the "read" of an image. Only if you do end up correcting them do you see just how far off it was. And this also supposes that you are very competent in technical perspectives.

And all those bolts and supports? Correctly drawn? Time and more time, and it is still probably not correct.

I have always had an eye on 3-d and its ability to generate perspectives of bizarre or repeating objects. It can save a lot of time if you can build something fast- the drawing is done, and done correctly. You can also play with the perspective and viewpoint endlessly. (This is one of the big things that drew me to digital in the first place. I was going to scan in the little painted sketches I do in preparation to do a larger painting, and play with them to see if I could come up with something better. I did not foresee digital taking over the whole operation.)

Since this was my first attempt at modeling, it is not very well constructed. It only works from the perspective shown. When I learn to model more efficiently I will gains the benefits that I mentioned above. The transporter supports extend below the floor - I dont know how to trim them. I used a friends copy of form-z, as I am still debating the $1000 Dollar question... Form-z interested me because of its strengths with architectural forms and that it supports radiosity. I rendered this scene using renderzone, and it looked nice, but I was really interested in what radiosity could do for me. 3-d renderings in general look awful for a number of reasons, the main to me is the lack of reflected light. Another is the quality of shadow edges. I could go on.

I rendered twice, one renderzone, another with radiosity. The renderzone looked good in some areas, radiosity in others, so I took both images into Photoshop and floated one on top of the other. Using a layer mask and a soft brush, I could reveal whichever version looked the best and it all registered perfectly.

I used a PowerMac G3 300/300/1MB to render on. The renderzone version took a few hours, the radiosity took overnight, if I remember correctly. Rendering times dont really impress me that much. What you need is the ability to interact with the model in real time and render previews quickly. I think that this is where speed will allow improved work. If I get into 3-d more, I will probably get a fast PC with an open GL card. But I hear Apple will support OpenGL in the future If anyone has any thoughts on this, I would love to hear them.

The texture maps are all painted in Photoshop, at about 2000 pixels. I find that it is best to keep the contrast low for texture maps, and to keep them pretty close in color space. If the maps are contrasty, the lights in the rendering will blow them out or in the case of shadows, you will get flat areas. I try to stay away from any area going completely black, as the eye can see into place no camera can see. The exposure latitude of the eye is many times that of film. You can see this in photorealist art where the shadows are painted black. The ambient or glow of a rendering do not help much as there is not indication of form, just an even glow. This is where I was looking to radiosity.

The teleporter window was done in PhotoShop. I made a noise field and scaled and distorted it, ran a few filters and fini.

The original idea was to have a player coming through the teleporter and telefragging someone, with blood flying everywhere. I played with some 3-d particle generators and it looked OK, but I could never make the figure look correct, so I trashed the whole idea. It looks kind of spooky the way it is. I may finish it one day, if I ever figure out how to make the figure look correct.

I would say I have about 20 hours in this image, spread over a couple of months. The original image which you can download here is 2,956 x 2,217 pixels.