Creating lacruga was a initially a test of a new shading/coloring technique our graphics guys learned. (courtesy of Dhibah Eng ;) The Original image was drawn by our very talented 2D character artist Chad Mendoza. The original was one of the first character pics for the new project Retrobution, and we decided to give it a whirl with the new graphics technique. Anyhow, let's get to creation.

This is the original image, touched up Via Adobe photoshop 4 from a scanned black and white. The first thing I did was duplicate the sketch image to a new layer, and set it to multiply. This allows the layer to be on top to show the little details of the artist's pic, while still being able to color around all the 'pencil smudge'. On the bottom layer, I color the image just using the fill tool.

This next step was probably the hardest one, although, not very complicated. Simply using Adobe's Burn (set to mid tones) and Dodge (set to highlights) tool (both at 23% pressure), I simply went through and defined the area's of Lacruga's body, bringing out certain highlights, and low lights to help make it look a bit less 'cartoonish'. This step is the longest, taking about an hour and a half to do. 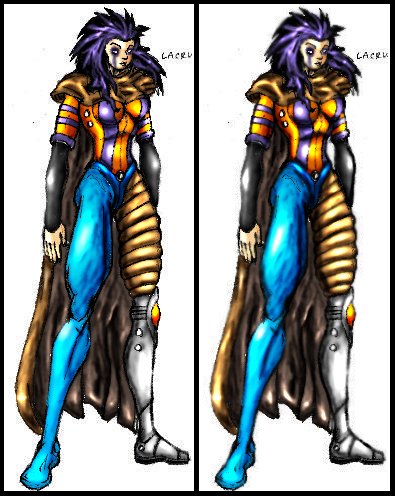 After the hard part was done, I went through and used the smudge tool to 'blur' the lines, colors, and area's I just highlighted together, so it didn't look so 'pixilie'. I smudged near lines defining darker shading, and smudged on lines defining outline. Welp, after that, I just went back through, added a bit more shading to the parts that were dulled by the smudging, and also added the black background, and smudged her outline into it, so it appears she's one with the background.

After sitting on my HDD for about 2 months, I Finally put the title on it, and sent it in to GameArt, just cause I love the place. ;) The entire image took about 4 hours to create, I didn't add atmospheric effects or anything because the image is to be a 'concept sketch'. Who Knows, maybe One day eh? Thanks for listening.