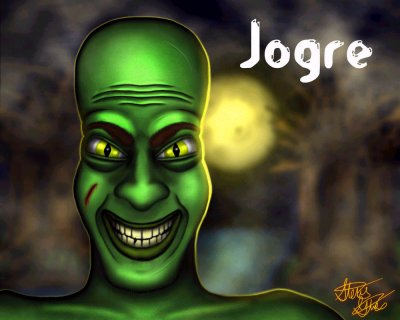 So, you want to know how Jogre was made, eh? Well, I started off by sketching an ogre type character on a sheet of notebook paper during health class as an attempt to defeat bordem. When I got home, I said, "Hmm?...this would make a pretty rad digital painting". I scanned the sketch, then opened it up in Photoshop 5.

The first thing I did in Photoshop was create a new layer, then I used my Wacom pen and tablet to create a "solid line" version of the drawing. Using a new layer above the solid line drawing, I proceeded to color the ogre. 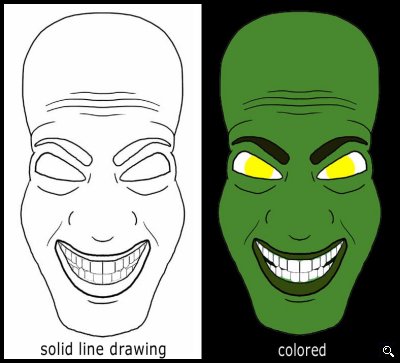 Now that my ogre has been colored, I needed to give him some dimension. This was done by shading and highlighting him. For this task, I used the dodge, burn, and airbrush tools. This is the point in which digital paintings start to "pop-out" at you and come to life. The solid dark lines are still visible, even after shading, so I smudged them away. My ogre was a bit blurry after this step, so I zoomed in and sharpened up some edges with the paintbrush tool. Finally, I detailed my ogre by giving him shiny eyeballs, adding eyelids, eyebrows, a cut, scars, hair, scaley skin, and yellow cracked teeth. 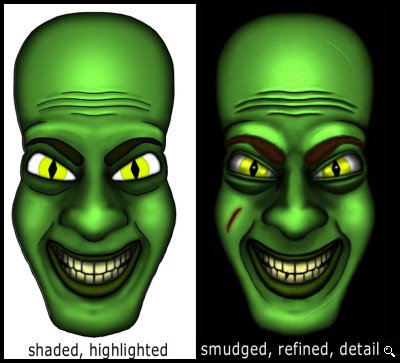 My ogre's head was done, yay! He needed something else, though, but what? A background would be nice. Yes, a foggy, moon-lit, nightime, forest background would be just dandy. I sketched some trees, a river, and the moon, then created a solid line version. After that I colored it, shaded it, smudged it, refined it, and detailed it. Finally, I gaussian blurred it to make it appear out of focus. Voila, I had a nice solid background to place behind my ogre.

At this point I had a nice ogre head and a nice background. I put them together and said, "Well I'll be damned, I forgot the shoulders!". So, I whipped up half of a naked ogre body and attatched it below his head. I was nearly done, just needed a few more details. I added some backlight to my ogre and had Photoshop render some clouds on a top soft light layer set at 75% opacity to act as fog. After that, I thought up the name, "Jogre", because he was an ogre that resembled the "Joker" on a deck of playing cards. I stamped his name up top, signed it and Kablam!...I was done.

You can find more of my art, some tutorials and free graphics at Gliebster.com. Thanks for paying attention to my babble :) You rule.