"VR Gets Better And Better" by dblue 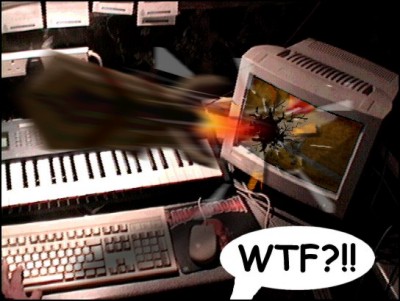 After discovering the gameart website, and looking through almost all the images available, I decided I would like to contribute something but I had no real ideas at the time.

I finally decided that I would do something along the Quake theme like so many others already on the site (0/10 for originality this time :) and also that my image would involve some 'real' elements as well as game elements... but I still had no solid thoughts on what I would make...

It wasn't until I was doing a spot of hdd tidying up the next day, when I found an old screen grab I had captured with my camcorder and WinTV card, then I had the idea for the rocket smashing through the monitor screen, supposedly shot from a rocket launcher in the game.

So... off I went into Quake2 to grab a picture to use on the monitor screen. Then I used Quake Scene Builder to create the rocket image, trying my best to get the perspective of the rocket right. I also created an image of a Quake2 dude shooting his rocket towards the outside world, but I think this was a waste of time really since after scaling down the image to fit the monitor screen, and then having all the other stuff on top of that, you really can't see him anymore!

Now I had my images I had to put them all together, for which I used Paint Shop Pro 5 and several layers to let me finely adjust each individual element later if needed. I have Photoshop4 too, but I find PSP5 is much easier to use, and quicker to get the effects I want.

Anyways, I touched up the background image a little, adjusting the contrast / brightness / etc. and getting rid of some nasty parts, although I couldn't avoid the obvious fuzzy effect which is one of the side effects of grabbing from a video source I guess :(

Next was the quite fiddly task of getting my Quake2 snapshot onto the monitor screen... After a bit of messing about rotating and resizing the snapshot to fit the monitor, I had to trim some pixels here and there, and then kind darken the bottom right corner to *try* and create a bit more depth, a sort of shadow I guess just 'cos it looked really flat just pasted right in there, trying my best to recreate the lighting and shadows that were on the original image.

Next I applied quite a lot (20 pixels or so) of motion blur to the rocket, which hopefully makes it look like its whizzing through the air. I also added the flame shotting out of the back, which was created by drawing three sections of the flame, with yellow in the middle, then orange going through to red on the edges. This was then gaussian blurred to blend all the colours nicely, and then the transparency was set to around 65%, hopefully giving a real nice flamey effect :) I also added the shadow of the rocket underneath, which was a simple black elipse rotated anti-clockwise a little, and set to about 40% transparent. I'm sure anyone out there with someknowledge of 3D and lighting will notice immediately that the shadow is wrong though, in fact, you probably wouldn't even see the shadow of the rocket from this angle based on where the light source is (set of spotlights right above those post-it notes on the wall)... but hey!!! its just for effect! :P

The last thing to go in was the pieces of glass smashed out of the monitor screen, which look really kinda lame I think, but I couldn't have a smashed up screen and no flying debris!! So I just quickly added those in there, made them a little transparent with a hard light setting and also motion blurred them slightly. I would've liked to maybe use a 3D rendering proggie to create some 'real' looking pieces of glass, nicely reflecting the light and stuff, but the simple fact is I don't have any such software :(

And that's it I guess :) Not a lot to this image really, and it only took me maybe 2 hours to create (I know it shows!)... But I will probably come up with some new stuff pretty soon from some 'other' games maybe. It'd be interesting to see cool artworks based on the gazillions of other great games available... who am I to talk anyway, I made a Quake pic too!! heheahehae... took the easy way out I suppose.. oh well :)


Text written by dblue for GameArt.com