"Lords of the Sword" by Michael Mik Fallik 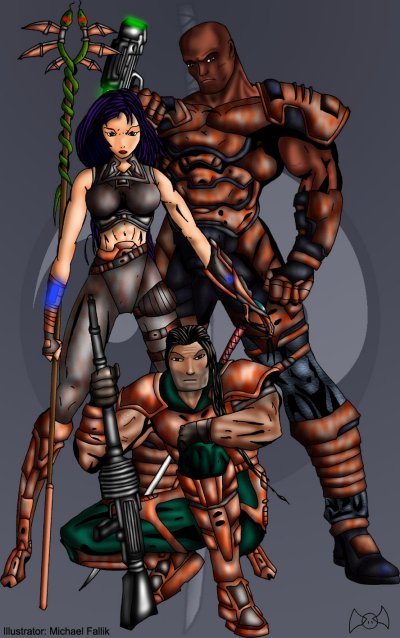 Drawing the Daikatana characters was my first attempt at drawing characters from a video game. I started off by looking for as many screenshots of the Daikatana characters as I could find. The web was a great source for this. When I had a good idea of how the characters looked, I started drawing the picture. I started out on a regular A4 paper and I sketched down the basic idea of the picture. Originally, I was planning to draw only Hiro and Mikiko. Once the anatomy was done, I "fleshed" out the characters until they looked like two ordinary people. Then I added their faces, hair, armor and finally the weapons (A gun and the Daikatana for Hiro, the Snake Staff and Claw for Mikiko). 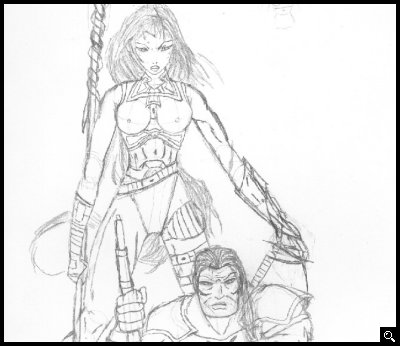 Next step was the inking (I hate this part). This basically tracing over the picture with a black pen (in my case, I use a Pantone Tria: Illustrators Black pen). I also added some shading to the picture, especially the really dark shadows. I find the Pantone pen very useful, since it has three separate tips. A fine one, a thick one, and a brush (similar to water color brush). Unfortunately the pens ink tends to run out very fast so its good to keep a few of these around (I have about 20, most dont work anymore). 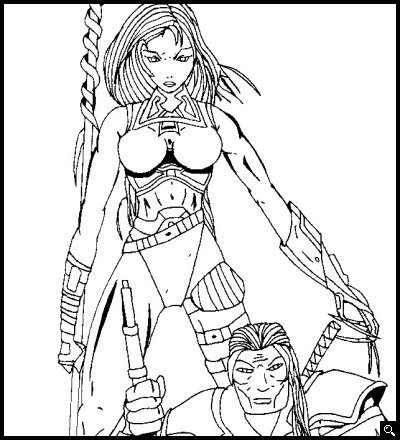 Once the inking has been completed, the picture was ready to be colored. But the picture still looked kinda empty to me, so I decided to add Superfly Johnson, to it. I drew him on a separate sheet of paper and inked him, in a similar process I prepared the Hiro and Mikiko picture. 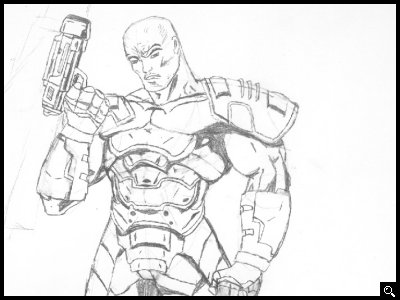 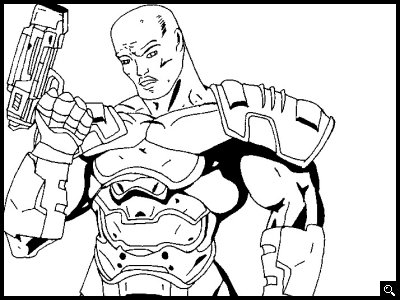 When Superfly was done, I scanned the two pictures on Grayscale mode, 600 resolution. I then, transferred the pictures to Photoshop 5.0 and reduced them to a 300 resolution Bitmap image, so the picture would be completely B&W.

Now comes the coloring (I love this part)! But first, I transformed the picture to RGB mode and copied all the black lines to an above layer. Once that was out of the way, I used the paint bucket tool to color the base color for the images. Then I used the toning tools (Dodge and Burn) to add the shading for the characters skin and non-metallic cloth. To do Hiros stubble I used 70% opacity brush, with a gray color.

I also used the smearing tool a lot, and the airbrush on his face. To color the armor, I used a 30% opacity airbrush with the colors black (for the shadows) and white (for the highlights). Then I selected all metal parts and added some noise, HSB noise and a red tint, to make the metal look rusty. Hiro and Mikikos hair was done by coloring it (gray for Hiro and blue for Mikiko) with the paint bucket and then using a 100% opacity black airbrush to do the shadows. 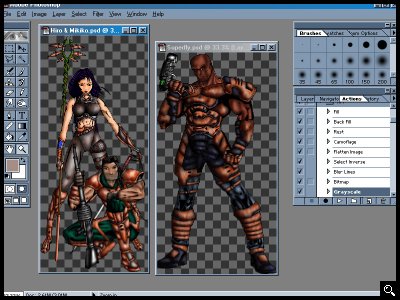 Once I finished coloring the characters, I copied Superfly, and pasted him behind Hiro & Mikiko. I reduce his size a bit, since he was too big.

So, thats it. This image took about two days to complete. If you read all this, you must be thinking: "WOW. These were five minutes of my life Ill never get back"!