Construction of this piece was pretty simple. I tend to stay away from complex geometry, because I only have a P200MMX with 64MB of RAM. The most time consuming part was getting the water just right. That involved several test renderings. I finally settled on a 99% transparent, slightly reflective ray trace material, with black volume fog. Why black? I wanted the water to look like lake water, and also look very forbidding, like it could hide anything. I applied the material to a large cube. 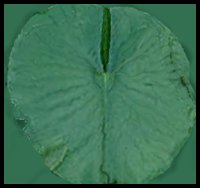 I also wanted the lilly pads to be very realistic. The best way to make things look realistic is to use pictures as textures. I searched around the internet until I found a public domain picture of lilly pads on a lake. I cut out one of the lilly pads, enlarged it, and touched it up in photoshop to accommodate the higher resolution. I then made an opacity map from this texture.

These two maps, along with a bump and a displace map, were applied to a two dimensional plane. It made a very good looking, very fast rendering lilly pad. To make the stalk, I bent a tapered cylinder primitive. The stalk didn't have to be very detailed, since only traces of it are visible through the water refraction. Here you can see a test rendering of one lilly pad in lake water. 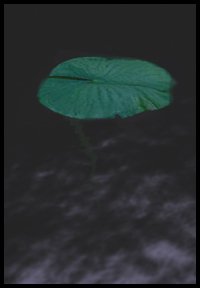 This lilly pad was copied and placed all over the water surface, at various altitudes. The long, slim plants were made from loft objects.

As for the demon itself, the head was modeled from a patch sphere. Using a UVW unwrap utility called Texporter (available for free on 3dcafe.com), I drew a skin and a bump map for the head. Yes, I only modeled the head! :) I used a separate texture for two little eye spheres, popped them in their sockets, put him in the lake, and it was done. All I had to do was touch up some details in PhotoShop. Rendering time was about 45 minutes. I also had to be careful with composition and color, since that really makes or breaks a picture like this.

More information about how I made this piece, as well as several others, can be found on my website.