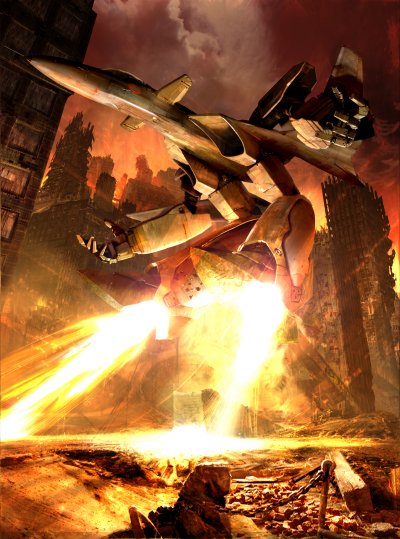 This image was commissioned by the Bandai toy company through the advertising firm of J Walter Thompson. The Art Director was Demian Fore, for JWT.

The original schedule for this job was pretty tight, about a week, and I had other work to do as well. In the end, I ran over a little bit, but it was OK. The printed ad is 300 dpi and 12 inches tall, so resolution was not that high, or lower than what I am normally painting at these days, so that was also fine. The one rub was that I had one picture of the subject only, and I had to use it because of the time it would take to regenerate another view. It could have been done from this one angle, but there might have been some guessing, but I guessed a lot in finishing the plane anyway. Time was the problem. Here is the original scan provided by Bandai: 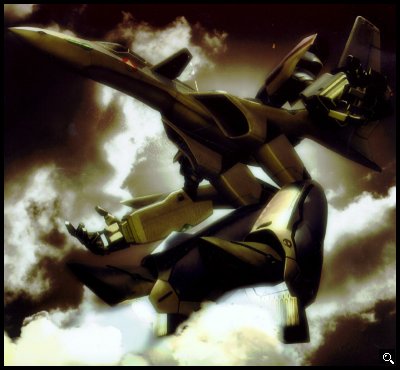 Demian Fore requested that the Macross (as I now understand it to be called) be taking off after laying waste to a city. The lighting in the original scan is diffused from above, so nothing of that image was used other than the silhouette and drawing. I cut it out with a pen path and got to work and completed this sketch in a few hours. 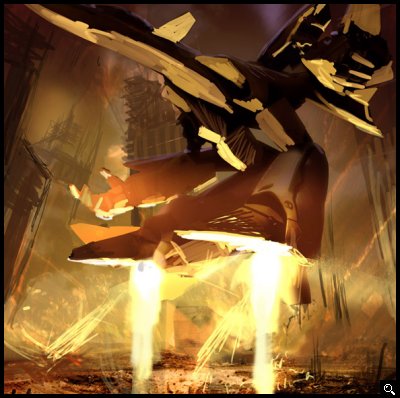 As is usually the case, I like the sketch better than the finish, and try to keep some of the spontaneity, but I am not always successful. The challenge was to reverse the lighting on the vehicle and set an overall mood. I changed the angle on the feet so that the exhausts pointed downward. I felt that this gave the feeling of a liftoff rather than a slowing of forward momentum in preparation to land. Damian felt that the rockets should feel as if they were housed in the legs, so I kept the exhausts in line with them. Overall, the sketch was approved.

I then started looking more carefully at the original scan of the plane. There are many strange things with the perspective, with things not lining up and vanishing points all over and many different eye levels. Wishing again I could start over, but time moving on, I had to go forward. I tried to establish what type of lens was used to match my background to, and it looked like a very wide angle. I cheated the background because the vertical vanishing point was so close it would have looked too forced to use the correct one. More fudging. Below is a way you can find the vanishing points of something- just paste a lower rez version in a big grayscale file and line up points until you have convergence. Then trace the left and right with a horizontal line and you have the eye level (if they match). They usually don't match exactly and this is due to distortion or bad construction. As you can see I fudged the eye level up in the final for design reasons. I don't like doing this, as it really hurts the image, but sometimes you have no choice 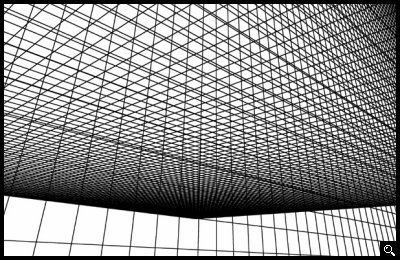 I then generated a proper grid in a 3-d program using the above image and a guide, so at least the city would be consistent with itself. 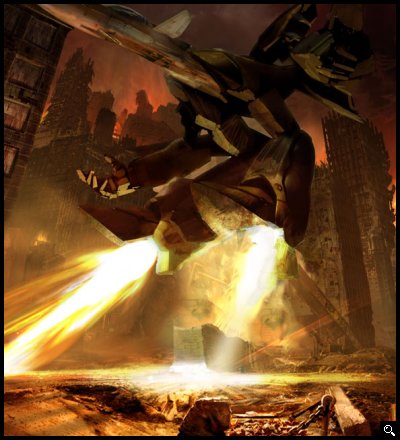 I toyed with the idea that the plane would not share the same grid with the city, but once again time restrained. But I guess the plane might be facing straight down the street, it makes some sense. It did simplify things somewhat. I then pasted the grid into a channel and got to work painting.

As the worked progressed, there was some concern about the finish on the plane, and about the overall darkness of it. I have been getting a lot of complaints about my work being "too dark" lately. It comes in cycles and tends to be self-reinforcing. My portfolio has dark images, people who want dark images tend to hire me. I am actually a pretty happy guy, honest, I can paint in a higher key, no problem*. So I brightened up things a bit as I went along. Also, I left the highest values to the end, as I work from the middle valued generally. So a half completed image may feel matte and a little dark. I liked the plane a little beat up, like it needs a shower after leveling a city.

I would have liked to include more flying debris, as the camera is on the ground and in the wash of high-speed exhausts. For this amount of chaos, I would expect to see all kinds of stuff in the air. But this would have obscured the plane somewhat, so I dropped the idea.