Hello my name is Tony. I was asked to do some concept artwork for Warcraft3.net, so I decided to draw a classic Orc. I usually start out with a sketch (outline). I draw my sketches in Photoshop and with the good'ol mouse, because I don't have a scanner, nor do I have a tablet. I use Adobe Photoshop, 99% of the time, although sometimes, i like to use Artgem for sketches.

So I fired up Photoshop and started sketching with the paintbrush, but I did a horrible mistake... i drew the sketch at a very small resolution (like 450x350), then i sized it up to about 2000x1500, which was very stupid. I didnt think the lines would become blurry *doh*... they don't become blurry if you use the regular "pen" tool, or Artgem.

Anyways, I worked around it, by using the smudge tool in the end, smoothing out the lines. I did not complete the whole body in the beginning, just the head & shoulders. Sometimes when i do sketch in Artgem (or even MS Paint) I blur the sketch softly, and then adjust brightness/contrast thus making the sketch look smooth and not pixelised!

On to the coloring! I created a new layer, and set the layer options to "multiply" so that i could keep my black lines. Then i coloured by selecting areas with the "Magic wand" tool.

After that was done, I went on with the shading. I'v stopped using the dodge & burn tool for this, as I feel much more comfortable with the airbrush at a low pressure, by setting it to "multiply" to make areas darker, or "screen" or "color dodge" for highlightening up areas. Because Dodge & Burn tools only work with grey scale, thus not giving me the colors I want.

Notice that I did not shade or fix the hair or beird yet, because I did that at the end. I tend to do this, just leave certain parts alone, and work more on them later.

After that, I started to draw the remainings of the body. (mainly torso & arms) I was having problems with the arms though. I couldn't quite get it right. So I sketched some in my sketchbook, to come up with something. His left arm, worked out quite well, but I still had some problems with his right arm.. soI decided to put a shield there instead. And it worked out quite well! (sorry for using a texture for the shield, but I was so dead tired on the image). If you look at his body, it doesn't have a rough outline like the head has, that is because I didn't use any outline, I just took the paintbrush with a color, and drew the arm & torso. I find it being much better then drawing a outline sometimes. I also fixed his hair & beard now, by highlightening up the hair, and then using the "smudge tool" set to 80%, and "dragging" out the hair. 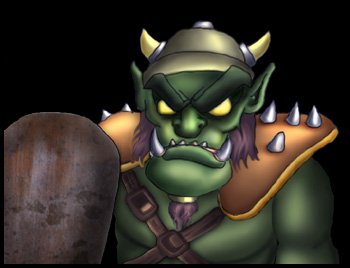 Then I created the background with the use of the paintbrush/airbrush & layeroptions, I did it really quick, cos as I said, I was really tired on the pic. I then added some more details here and there, some glow to his eyes, changed the lightening on him, so it would look as he was standing in the twilight. Final thing I did was to resize it down to 800x633 resolution.

The image took about 8 hours to make spread over a couple of weeks. I'm not quite satisfied with it... some of the lines look way too ugly, and his pose looks boring. And I can't really do detailed texturing yet, but im learning. I think its the lightening of the set, that really makes a picture look great. One of my older artworks didnt look that good from the beginning but, after tuning the lightning, shadows and colors it looked a lot better. Therefor I spend alot of time on the colors & the ambient lightning.