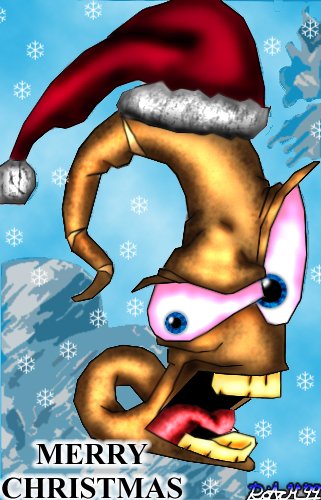 Howdy! Back when Earthworm Jim was a pretty popular game (IT STILL IS DANGIT!!!!) I drew up this picture of 'ol saint Jim to work on my drawing skills. Well, it got stuffed in the vault and i found it about a week before christmas. I scanned the image from 1994 into my computer and started the digital work about 2 days before christmas.. late one night when I had finished off about 2 gallons of eggnog already, and beggining to see dancing christmas worms all over the place.. ( still can't find my car keys.. ;) Anyhow. The entire art took about 2-3 hours to complete, probally the best work i've done so far. (Groovy!) This spotlight is broken into sections... mainly because that's how i did this picture, with about 32 layers in Adobe Photoshop, all sectioned off in their own areas. Anyhow, let's get onto the show!.

The face was done with an all to common process. First, i outlined the black and white scann on a new layer. From there, i colored in the face, with a nice dirt brown (it's a worm right?). Went for the darken brush first, midtones mode at about 23% on a medium sized brush. Since the worm's skin is kinda rubbery, i tried to burn with a 'bulding' pattern. Mainly just burning on the underside of all lines defineing facial attributes, and burning next to all the lines for the outline. For the highlights (dodge tool, highlights 23%, med. brush) i wanted the head to look rounded and really plastic-ish so i did some pretty intense brightness for the main part of the worm (main reflection that is) and lightly featherd it out so that those parts will come up alot more apparent. I highlighted the facial features in the same buldge pattern: Highlighting above the facial lines, slower drop off to create a 'curve'. Now one thing that has plauged me in the past, is the lack of texture to an image. I wasn't about to let jim have the same facial problem, so i came up with a solution. I took one of the misc brushes (kinda specled), and used it with the burn tool to create texture. I only did this around the outside edges, or any place there was dark shading. Mainly because where the light reflects brightly, you won't see a skin texture. Finally, i went through and smudged the lines. For smuding, i went on the lines that defined oulines, and next to the lines that defined facial features (finding a pattern yet?). This combined with the burn shading from before, makes the shading more promonent, because you smudge the black line into it. This is where the lines dissapear, if done right, this can be the step that makes the diffrence in your photo. Usually after this step though, i have to go back through, and re-do the shadeing and texturing stage. Mainly becasue when you smudge it, it becomes a bit dulled. Ok, Jim's face is done.. so he can start hitting on all the chick worms.. let's move onto the mouth so he can start talking to them to. 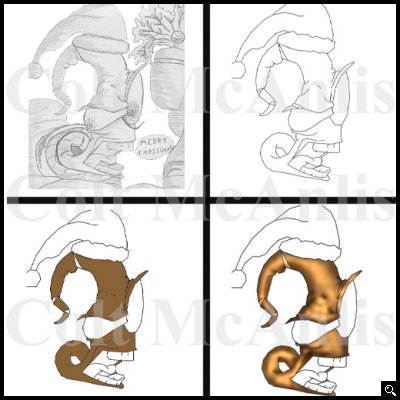 Now, in creating the face, i defined a set process.. it's a pretty accepted process, and almost everyone uses. I don't think theres a name for it.. so i'll refer to it as "the technique" :) Anyhow, i used "the technique" on the teeth and the tounge of the mouth the same way i did the face. The tounge was also plasticly and flesh, so i added the texturing to it. The teeth however, i just made yellow, and dodge/burned/smudged it so that it looked like real worm teeth. (whatever those look like) It's a preatty easy step here.. the mouth.. cause everything is the same as the face.. just done on a tounge :) Ok jim, let's get you a hat buddy. 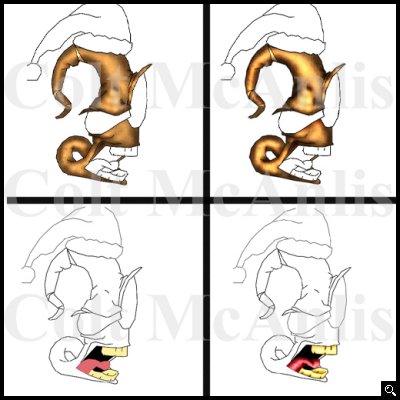 Jim's hat was a Tad diffrent since it's cloth and not worm skin. Firstly, i had to find a good red color that would allow me to dodge & burn it well. Second, i had to find a good grey color for the brim & ball so that my shading for the fluff would look ok. Now, the hat, since it's fabric, all you want to do, is be very subtle with the shading, have large areas the same shade, then a quick drop to the burn tool. This makes it so it doesn't look highly reflective like jim's skin (ie plasticy). I used the dodge tool pretty hard.. mabey to hard, but only because of the extreams on jim's shading. (Gotta be consistant) Turned out OK i suppose. I hadn't the faintest idea how to do the brim and ball of the hat. I tried a few ideas to make it look 'fluffy' when i realized that i was making a freggin worm in the first place, and i wasn't going for 'realizm'. So, i burned the grey with some random streaks, then dodged it with some more random streaks (about the same amount). I then burn/dodged it to make it look rounded, and wala! Brim & ball. Of course, i went back and smudge/dodge/highlighted it. Can't do anything without doing that. Ok, jim's got some clothes.. let's get him some specs to check out all the fine ladies. 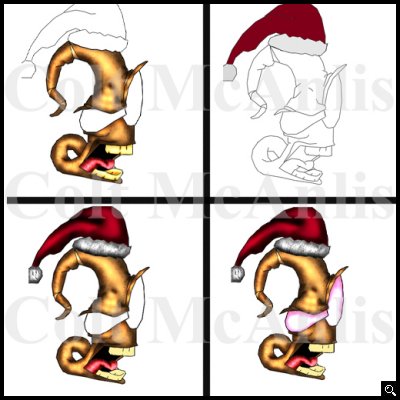 I'd never done eyes before. Attempted, but never did it. I searched around for some info, and found a nice tidbit that can be summed up as follows: "Eyes are pink". Gosh.. brings a tear to your eye. (Pink eye that is..... HAHAHAHAH..sorry..) Anyhow, Eyes are pink.. Where the white comes from is the light reflecting off of it. So, in a silly attempt to prove this with Jim, i made his eyes pink. I believe i used the wrong shade, because as you can see, theres white... and pink.. no middle ground. I dodged the pink to get it to white.. any pattern? Not really.. jus keep the pink out of the way of the pupils. Now the pupils were cool. First time i had done these too. We have to remember that the pupils have a certian amount of texturing to their color. To achieve this, i took the same brush i used for texturing jim's face and tounge, (pretty popular brush) and burned the color of the pupil pretty dark. Now that i reflect on it, i should have done the same process with dodge to get a better effect. Then, i simply added a white paintbrush mark to each pupil to give that rounded effect. In my origional image, Jim had bloodshot eyes.. but i couldn't bring myself to do that, so, i just added a nice shadow around the pupil to blend it into the rest of the eye. Well, Jim is done!! (WOOHOO) Let's find something for his background. 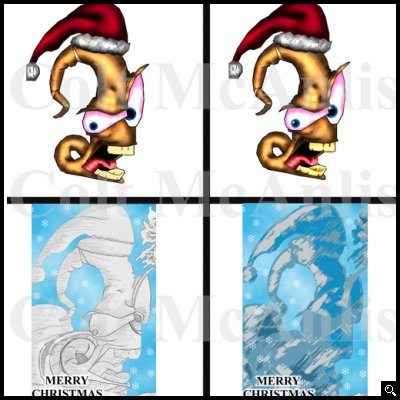 WTF? How did I only get 15 steps... should be 16.. ahh screw it. Anyhow, The background has to be the only thing that hurts this image. To tell the truth, the eggnog was startign to get to me, and i coulda swore those worms had stolen my car, and to top it off, i couldn't think of a good bg that wouldn't distract from jim's face. So, I took my origional B&W, Used some filter from the artistic folder (can't remember which one.. dont' care) added some snow flakes and a cruddy signature i made, slapped jim's head on it, and VAVOOM!! we have "THE CHRISTMAS WORM!!"

First off, i don't know how i ended up with only 15 steps.. there's 16 images.. 1 image=1 step... nevermind.. Jim is probally the best work i've done so far with this drawing type. I have coned the phrase "Gotta be like dhab" (dhab pronounced "zaab") which just gives a credit to Dhabih Eng, whom probally origionated and perfected "The technique". And goes to show how i've been trying to duplicate his art style for about a year now. In any drawing, i've come to find out the diffrence between an awsome piece, and an amature's piece, is the addition of detail. I added texture to jim, so that he didn't just look like a wound up talking burnt cylinder. The texturing added detail and life to the image (i'd even say depth..) So, if you can't seem to get art looking 'just that good' yet, try some tricks with detail. Thank ya for reading this entire spotlight.. for the length of it, it could be a freggin tutorial... hum.. mabey it should be..Hopefully it's shed some insite into some stuff that you didn't understand, or gave you a new technique or something. Thanks again for reading! See ya soon! I'm off to buy more eggnog before they stop selling it!!!