"Inside my Mind" by Kos.Mandis

The idea for the Visor came to me while checking out the skin of the model that came with the looong awaited demo, doing an image revealing the cyborg's skull beneath the mask. Along with a whole load of other stuff, the thing remained in my sketchbook for some time... 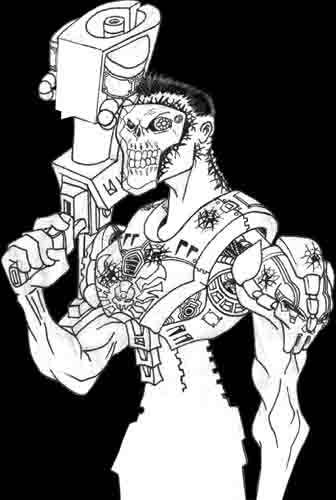 A bit later on, I saw Muller's artwork in the Quake3 manual, I though ''Shiiiitt that was close :-)'' so I decided to get the image started. Around that time, the guys over at Ichor Vile contacted me to do something for their website and I combined the two by having visor draw a bloody 4 (their symbol) on his face. At that time I started thinking doing a bit of animation, since only this way I would do what I really wanted with the image... The only bad thing was that I had never used flash before :-) 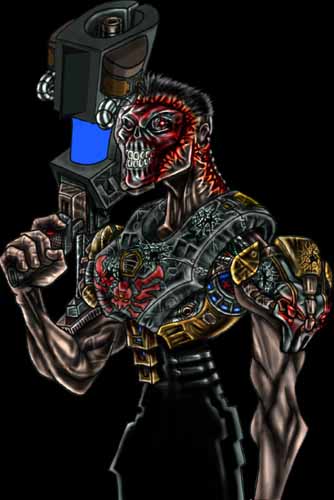 The original position of Visor was with his hand down, so I had to draw another hand and attach it in a new layer after scanning and cleaning it up on Photoshop. Furthermore, the mask was created in a separate layer, (I dare not think what would happen if Photoshop didn't have layers!). After colouring, dodging, smudging and smearing as usual, the image was ready to ''animate''-- short of, don't expect any Disney-animation :-)

Flash kicks ass!!!! I learned how to do what I wanted in a day - Basically I imported the jpeg of the finished visor image in the program, I ''borrowed'' a couple of sound effects from the Quake 3 game, and the idea was to make the viewer visualise a guy running in the dark, getting railed by visor who then draws the 4 with the guy's blood! To keep the file size reasonable, I cropped animated gifs of the face transparencies and fitted them in a new layer over the original image.

That's pretty much it, I don't really like writing, but hey it's gameart ;-) Besides "an image is 1000 words", so you got yourself a small book here! Cu later, when I finish my Quake 3 wallpaper amongst others...