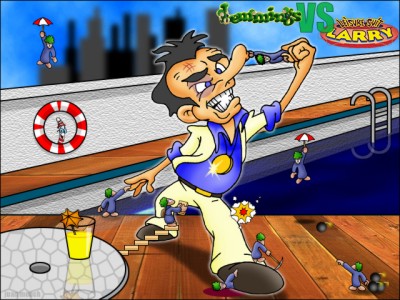 The idea to do "Lemmings vs Leisure Suit Larry" for Game Art's Versus Contest was not an easy one. As in most artwork, this one began with an effective concept, lot's of preliminary sketches using the old pencil and paper, and patience. I started the artwork with some simple sketches of the main characters and the background. I consider this the brain-storming stage of the project because many ideas come and go, and some never make it to the final piece. These are a few of the preliminary sketches for "Lemmings vs Leisure Suit Larry". 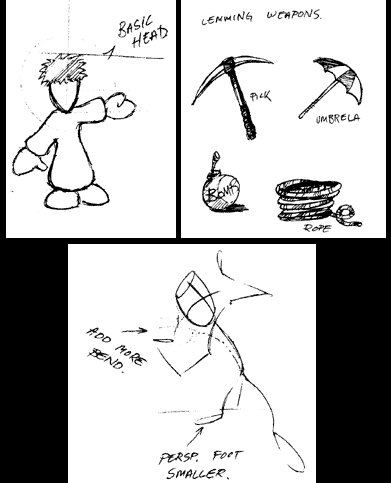 The overall intention of this project was to portray the characters true to the originals in a way that would, at the same time, fit the Game Art Contest expectations. This demanded much research of the subject chosen during the early stages. I would highly recommend the internet as a primary search tool. In today's world, if you can't find it on the internet it probably doesn't exist. In my investigation, I found some Lemmings conceptual art as well as some Leisure Suit Larry screenshots of the actual games. These were both informative, and very useful to keep my version of the characters true to their original counterparts.

After feeling comfortable with the idea and references for the project, it was time to begin. I chose to start off with the Larry character. Using the preliminary sketches, I penciled and inked an outline. Then I scanned the outline into the digital painting program where I applied it as a standalone layer. Working in layers gives the ability to concentrate on a specific section of the image while not having to worry about affecting other sections. I then cleaned around the edges by deleting the white area. Finally, I use the outline as a selection guide to select different pieces and fill in the pieces in separate layers with solid color.

After all is said and done it's time for my favorite part of the artwork, the detail. Detailing includes shadows, highlights, and effects. I chose to start off with shadows for Larry. I find there are two ways to do shadows when working in a digital paint program. The airbrush tool is one way to create shadows in which a darker shadow of the solid base color is selected. Airbrushing is probably not the best solution though, because it doesn't stay withing the border of the color unless you have a selection. The second, and probably better option, is to use a Dodge/Burn tool such as the one available in the Adobe Photoshop paint program. This tool helps for a couple of reasons: a) You don't need to select the darker colors as in the airbrush, b)You don't need to set selections since the tool only shadows where there is color, and c) You have the option to differ the level of darkness you want to apply to the shadow. The same rules apply to highlights. 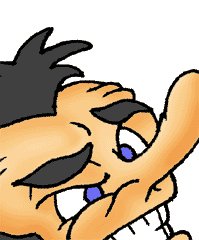 In "Lemmings vs Leisure Suit Larry" there are a few basic effects such as the sparkle of the medallion, reflection of pool and glass, and blurred background. The sparkle was easily done by airbrushing a songle dot and smearing it in four corners, then cleaned up around the edges. The reflections were basically mirror clones of sections of the artwork which have a lighter opacity to make them look natural. Finally, the blurred downtown building effect was done with a built in blur filter in the software.