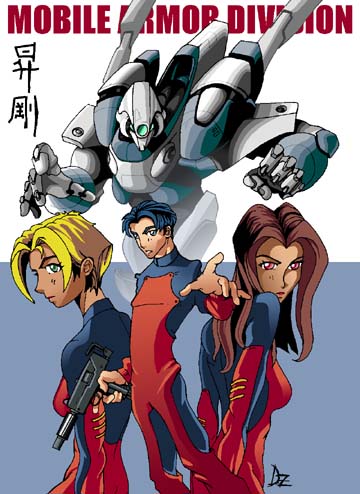 This picture took me about a day to finish. I really tried sticking to the style of original shogo as closest as I could, i.e. taking the color from pics off the web, basic mecha design etc. However I did sneaked a bit of originality in there from time to time. I made some sketches based on original character pictures to start off with. Most of the original characters' noticeable features, like hairstyle, haircolor, and pose were retained in them as you can see. Of course, I had to adjust them, so they actually resemble anime. In some case like kura's(chick on the left) haircolor, or kathryn's eye, were changed, as I stated before, to add originality to the picture. Also, the girls' uniforms are more "fit" than they are in the original, 'cause I don't think I seem a girl in an anime with baggy cloth like that. |^O^| 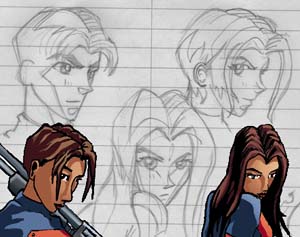 I then proceeded with the overall design, sketching different poses for each object allowed me to choose the best combination of poses from each of the characters. At first I wanted to use the assault rifle from shogo, because it's few of the bullpup designs that actually looks cool. But I had to scrap that idea due to the gun's size. So I had to go with something smaller; the mac-11, or is it a mac-10? (and yes, I realize he holding the gun on the wrong hand). After that was done all I have to do was outline it on the computer. I guess you *could* ink the drawing on paper, scan it, then adjust the contrast to get the outline, and a lot of people do that. Though I prefer drawing it from scratch on the computer. But if you are like me, who can't draw sh^t with a mouse freehanded, that's might be a problem. Here is my secret, just use the line tool. But don't bother with the curve tool, just find it easier with series of straight lines, in my opinion. 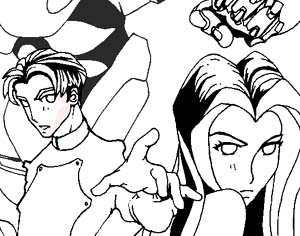 For coloring, I just copied the outline onto a new layer, made colors other than black transparent, and did the color on a seperate layer underneath the outline. The coloring and shading was purposely simplified to miminick the japanese anime style. I notice for some reason the mecha are usually more detailed than the characters in anime. Therefore only about two shades of one color was used on the characters and double of that on the mecha on background. I used gradient tool on some highlight so the drawing get too far away from the original work. I grabbed the color of the characters from the original pics. The original color didn't work well with the mecha on the background, because the original mecha also happened to be red, which didn't work out with the red uniforms. So I decided to go with my own color. After series of testing I finally found the best colors for the mecha that made it a good balance from the rest of the picture. Now it's just the matter of adding the final touch, which include adding the Japanese characters and the red title on top that made a color balance from the red of their uniforms. Finally I lasso around the area of mecha around the guy's head and faded out, and made sure his hair stood out. And voila.