"A Word With You" by Tom Blanchard

Well, lets see. I have been doing digital painting for about a year and so my style may change a lot in the future but right now, I tend to spend anywhere from 7 hours on, on a picture and maybe longer. I can't quite get the time to work straight through, so I'm estimating that this picture took about 18 hours from start to finish. The actual size of this picture is 15 in. high by 40 in wide.

OK, on to the process. This image started as a small, simple line sketch of the hand in the fore ground. When I started I decided to use red because it was to be the glove of another character which now resides in my unfinished pile. 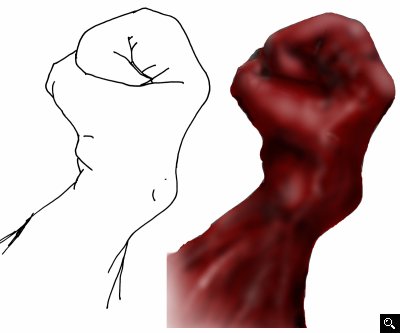 As you can see, the picture is very un-detailed and leaves a lot to be desired. After I had completed this painting, I felt that it needed more. About this time I found my old copy of Dungeon Keeper 2 under my desk and got addicted all over again. This brought me to thinking and since the hand was red I thought I could do a reasonable drawing of the Horned Demon, and at the same time I was working on my college applications and I realized that I had no self portraits. So I decided to create a self portrait, albeit modified a bit.

So I took my hand picture and a picture of my head I had taken with my eyeball camera and placed them on one new document, I had no specific size, and since I love to work large (working large helps a lot, you can add more detail, and when you're done you can reduce the image a little bit to clean it up some) I made an immense picture, something like 50x50 and got them set how I liked them. I then set another blank layer over the photo and covered it with my base color, a deep crimson. I used a 100% opacity, and different size brushes to get the area filled, I hate the fill brush, it leaves those nasty white edges, and once that was done, I created a new blank layer over the base layer, and using the airbrush tool set at about 1-2% opacity, using various colors, especially black and white, proceeded to shade the drawing. 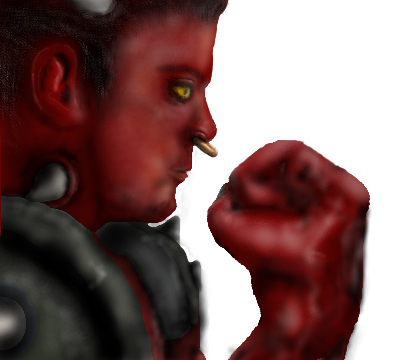 The armor pads were added in later, drawn in with the mouse, I was too lazy to draw and scan, and I figured it was good practice. After this I drew the imp on the chain on paper and scanned it in, then after placing and re-sizing I started to paint in the base colors on yet another layer. Adding another layer I started to do the shadows, again the airbrush, I don't know, but I just don't like the look of dodge/burn, I just do my shadows by hand with a very light airbrush. Much of this was just paint shade repeat. 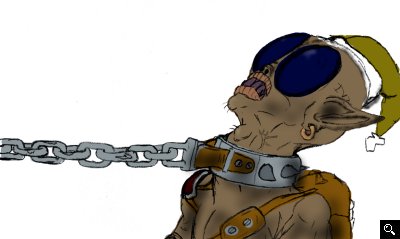 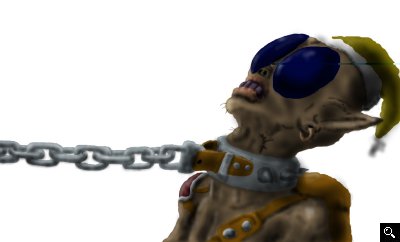 After shading the imp, I started up Dungeon Keeper 2, created a room to my liking, possessed a creature and took several screenshot photos of the room from various angles.

After returning to Photoshop, I picked a background I liked, darkened it, re lit it using lighting filters and the airbrush so that it would fit the character's highlights better and used a Gaussian blur at an 8 point radius to draw the focus back to the foreground.

I put my signature on the piece and submitted it. I hope this Spotlight has been as helpful to you as many of the others here have been for me. If there's one point that I would say helped me the most, it would have to be: patience. Oh yeah and Practice Makes Perfect.