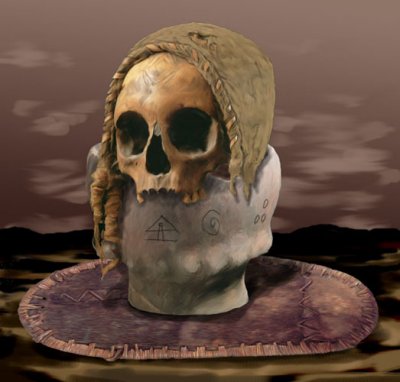 This piece started life believe it or not as a conversation with two very good friends of mine in a pub. The conversation drifted to the subject of methods and the way in which computer art is rendered, the conversation hung in the air and subjects along the theme of use of colour and image proportion were discussed. At some point in the conversation the question was put forward as to how good you could really be if all hindrances such as impatience and time were irrelevant. I wondered how close you could get to the image that you visualise you could get, it is I find, often common that while working on a piece of work that areas are rushed as the need to see whether the test of the starting of a piece lives up to the expectations of a final piece of work. A common mistake would be to perceive this as laziness. Every artist would however agree that often hours can be taken working on an eye or a hand to try and capture the correct pose and element within the frame. I wondered as to how much of my past knowledge I could try and utilise to create a piece of work that reflected as much of my ability as possible. I wondered whether even in this I would realise where my weakness were as it is so often very easy to work on something that neither challenges or promotes any learning process. While new to the understanding of computer art, I have a large background or hand drawn or painted media. And once id undertaken the first of my computer pieces I was surprised just how much was still relevant. Drawing fundamentally from the same pallet system and quality of line, bearing in mind lighting and perspective. I shall not explain the method in which the piece was put together as that was not the reason for this piece. Equally I believe that ever artist should adopt his or her own style and method. I shall instead explain the evaluation that I have reasoned from its creation.

Working from sketches and photographic references I pieced the work together, I tackled four different elements of the work separately. Firstly the skull, something that I hoped to learn proportioning, secondly the pedestal which I decided that was to be made of stone as to challenge my understanding of textures. Thirdly the leather base with which I hoped texture and use of colour would be important and finally the sky and ground something that really was an afterthought to finalise the piece.

I spent probably the least amount of time on the skull. My drawing style works in the natural appearance of curves and study of light and dark. The cloth cap made an appearance as I realised the skull was looking bare and would cover the largely bare part of the skull, again a detail more than part of my study. I was wholly rather pleased with the final result of the skull I was pleased that I could make use of the painting skills that I had acquired and found the photographic pictures I had invaluable for my choice of pallet. I was drawn into the detail that light and dark played in its creation. Bone structure I found relied more heavily on the subtleties of contrasting colours, I found the texture of bone the most interesting where I could concentrate on small shattered pieces of bone around the nose and on the teeth. There were also upon study more small imperfections on the surface of a skull than I had first imagined and it was ultimately these imperfections that helped me achieve realism to the skull.

In contrast I found the second piece of my work the most difficult, time consuming and infuriating, I concluded that a smooth surface such as that found in the skull was one thing but when challenged with the endless imperfections and texture of coarse stone it was something that in the end beat me. Scrapping my first attempt (it took me an hour or so complete a piece of rock a couple of inches square) which I decided would not even out in time management to the piece, aware that my initial purpose was to ignore hindrances such as time scale, I was also aware that I should maybe approach problems from different angles. I restarted the pedestal with something I had learned using acrylics and oils, which were textures of the brushstrokes. I tried to use the pallets I had in a rough and course method using the brush tool. I worked close up and with a small brush so that my brush marks when viewed further away would create a texture of their own. In a way I feel I succeeded in creating a stone type effect, it was however not the grainy texture that I had envisioned. I am now aware that my skill lacks the report needed to understand how to create the proper effect, I was disappointed, but reminded that this was the intention of this piece.

I was mentally quite unsure as to the approach I should take with the leather base. While the skin in a fold or on the hand would offer a unique challenge the stretched tautness of the leather base offered a challenge of its own, the way that leather reflects light and the way that the bindings create a lighter texture around the incisions made in the leather. My first attempt using a pallet from a leather glove that I had a photograph of looked too flat it mirrored the shininess of the polished material too much. It didn't suggest the stretched feeling that I wanted to the piece, I researched back again and found a picture of the underside of a zebra skin that was being prepared in the sun for working, it was bound tightly in a frame and suggested all the ideology of the base that I wanted. I noticed that the colours were more patched and varied than my first attempt and so I applied a more varied and different pallet to the brush strokes that I used on the base. I then used the smudge tool to create the texture that I wanted using small thin hand movements to create the illusion of the material being stretched.

The final part of my piece was the background, although many artists choose not to add some context to their piece I decided that a few minutes creating a setting would harm the overall composition of the piece in any way. I didn't put much detail into the ground and sky and tried to simply suggest the appearance of clouds and desert plain, too much detail I decided would take the eye away from the centre point of the picture, which was the skull.

Without sounding too much like an English essay I would conclude that this piece was indeed worthwhile. Had I not attempted it I would be none the wiser as to my weakness in textures. I find it encouraging that my future pieces of work will benefit from my experiences learned. I also found that maybe working on these three items separately wasn't such a good idea as I later noticed that the lighting on the stone and skull come from two different sources something that isn't reflected in the two pieces once in unity. Something again I shall have to bear in mind in the future. So a piece of advice, to try something that challenges rather than something you know you can do. You'll learn more from one piece of work than a whole collection of pieces of work. And I would have to say always try and use photographs as pallets, take them, or find them in a book scan them in and use the eyedropper tool to apply it to the paintbrush. Even if all the colours seem too contrasting once you go to work with the smudge tool creating textures they mix together to create all the variations between the colours you'll ever need to finish the piece of work.